Yes, this week’s blog is dedicated to CMW, but first, let’s get this out of the way………congratulations to Starbucks for the brilliant free social media campaign this week……I’m guessing this trended for many days……….and shame on all of us for contributing. Unicorn Frappuccino? Seriously? Never have so many, done so much, for such a calorie and carb count. Hash Tag Sucked in Grande. Hey good for them. I guess. 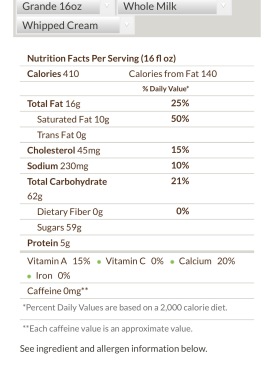 Speaking of Grande…..another Canadian Music week has come and gone in Toronto. The 35th edition. Gee, I remember when it was called “The Record” Conference named after a now defunct Canadian Trade magazine of the same name. David Farrell was the organizer back then. Now, and for as long as I can remember, Neill Dixon has been running this conference and for the most part, he and his group do a great job. Congrats to them on what seemed to be another successful week of mingling, schmoozing, drinking, celebrating, learning, reuniting and performing with insomnia for most.

The annual conference is significantly funded by the major Canadian radio companies and it’s a good event for promoting and celebrating Canadian Talent. It’s a bit cliquish and somewhat political but it works and everyone who attends, is drawn by not only the people they meet but the curiousity of what could happen when all these Type A people get together with liquor.

There are many moments of “heeeyyy how are ya”? in the lobby of the hotel or the seminar salons or the bar………many of those moments progress with the person standing in front of you, looking around the room for a more interesting or important attendant to speak to. Not a lot of eye to eye after the handshake. It’s a good study of human interaction. That said, I did a ton of “Heeeeyyy how are ya’s”………it was good to see many old colleagues and friends.

Most of the radio companies also use the event to get their PD’s and key talent together for a day of group meetings. There’s a lot of “look, there goes the Corus guys coming down the escalator” or, “that’s a Bell group in that part of the bar”. It’s a little like Grease with the T-birds and The Pink Ladies…or The Jets and The Sharks in Westside story……….it would be funny in years to come to have everyone break out in choreographed song and dance………”Hey Newcap, take these lyrics and busted moves”……..1, 2, 3……and….!

The event culminates in the Annual Broadcast and Music Awards gala. The industries’ most intoxicating night. They award dozens of “(Your title here)…..of the year” awards. Man, they now have those all announced before the buns are even unwrapped at dinner ………names flashing across big screens, fast announcing and a real “get ‘er done” approach. I think that saves the awkwardness of not winning and the avoidance of speeches, which is probably right…………but it’s pretty unglamorous.

There is a good show that night I think……again this year, Canadian TV up and comer Jessi Cruckshank was the host. This was her second year…….she very funny last year but it’s a tough crowd to command attention for more than a few seconds…..this year, she had the crowd and was pretty hilarious. My favourite Canadian Rock group RUSH received the Alan Slaight Humanitarian Spirit Award. Dang, I chickened out to track them down for a selfie………Jann Arden, 54-40 and concert promoter Arthur Fogel entered the Canadian Music Hall of Fame and CHUM FM’s Marilyn Denis got the lifetime achievement award. I’ve been a fan of hers for a long time. I know her son Adam Wylde….he’s a star in our industry on KISS Toronto and City. Jann Arden absolutely slayed the crowd……….man she is so funny and potty mouthed…..loved it. These photos are from a CMW newsletter I am subscribed to. 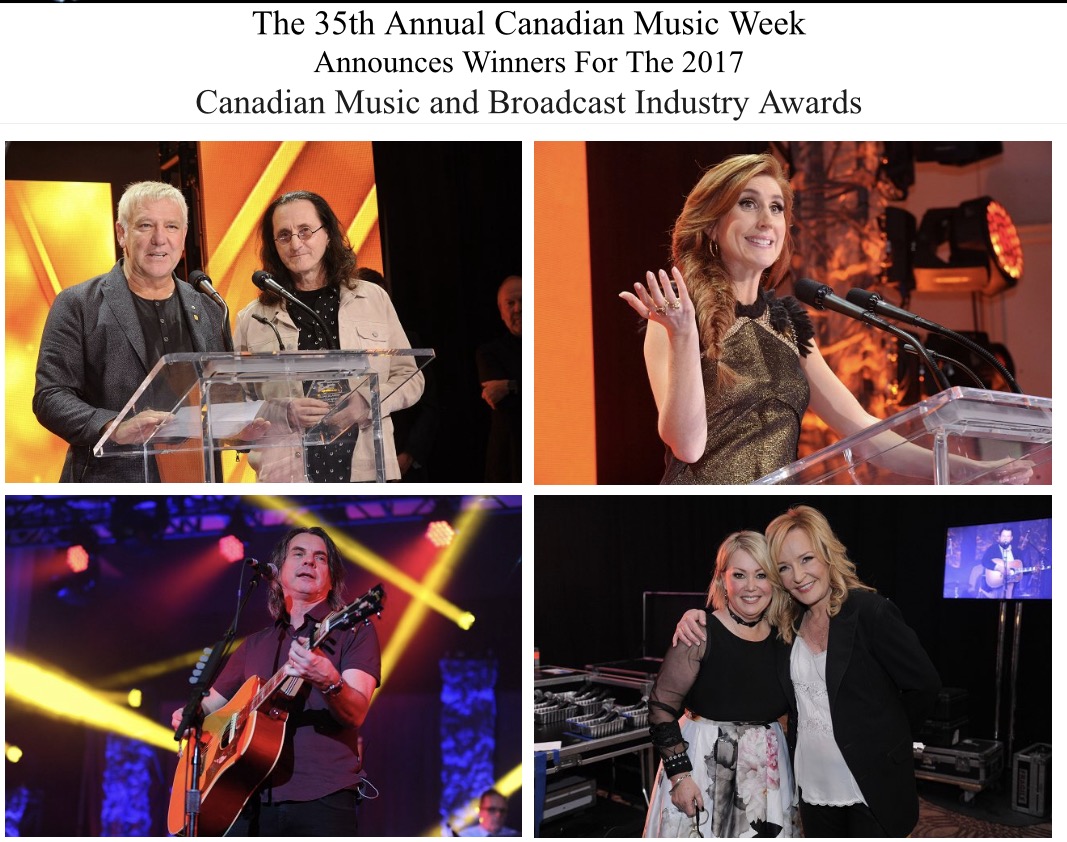 As I mentioned, companies get together for this event and we all get a few tables close to each other for the dinner. I was lucky to be with the Rogers group…….I sat with Brady and Adam, (who gave our group a presentation earlier in the day) Julie Adam, Garner Andrews from Sonic in Edmonton…..love that guy……Robin Harper, Ian March & Adam Thompson to name a few. We had fun…..free wine and Jack Daniels……..oh boy.

Below is Kevin Britton from Sudbury, Craig Pfeifer from Winnipeg, Julie Adam, Jaime Draward from Winnipeg, Ian March from Kingston and Robin Harper from Ottawa. 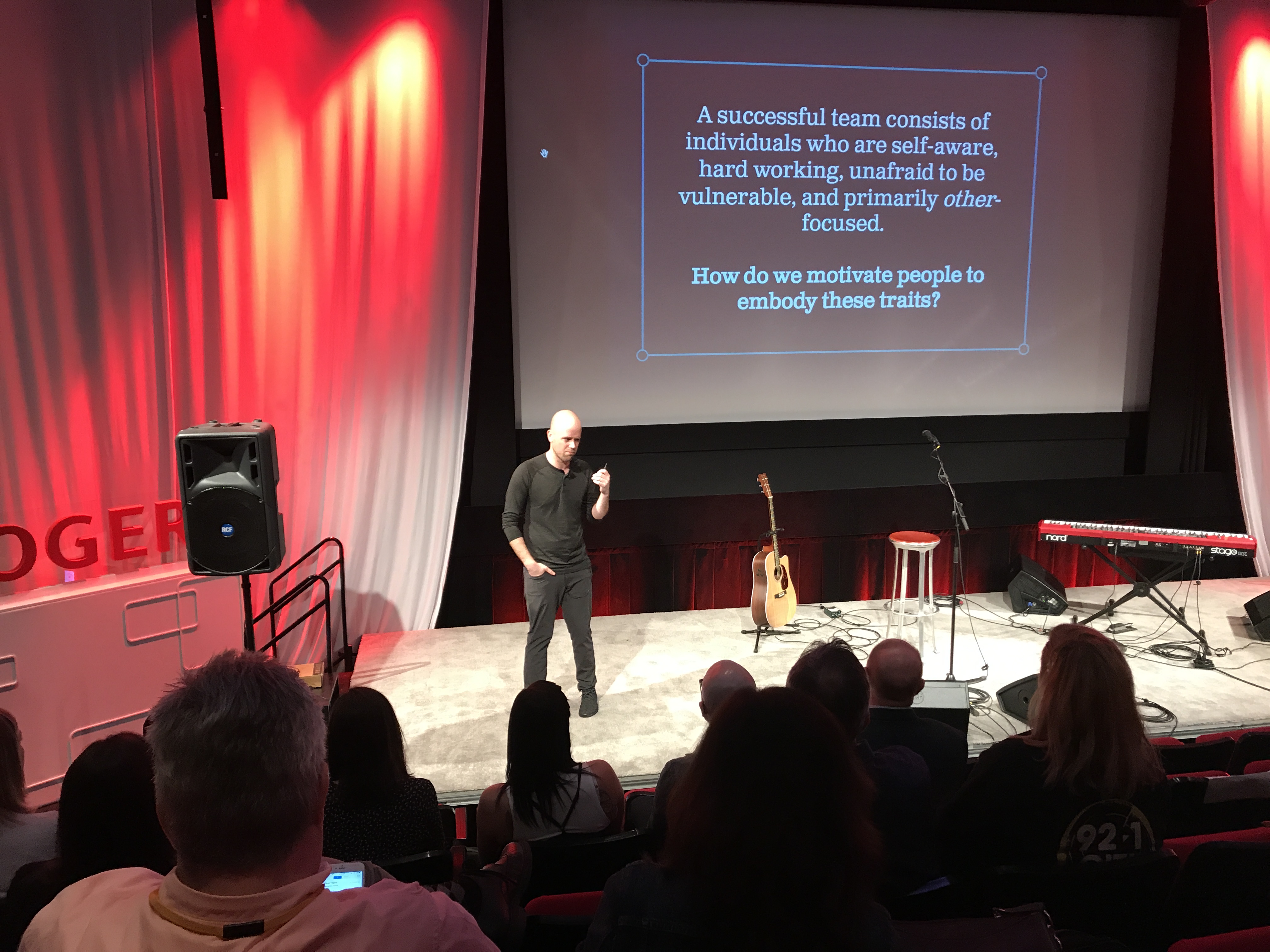 There is a festival component to Music week that allows live music fans to get involved too…..many bands play in many venues for many nights to get exposure.

So, this weekend, about 1000 industry people are reflecting on an action packed week in Toronto….all feeling pretty good about the radio industry I hope and remembering that HogTown can be a fun place with NHL, MLB, NBA, tons of shows, tons of restaurants and memories of the crazy and fun people we work with.

Oh ya, one final thought on Toronto……..I had dinner with Brady and Tucker on Wednesday night……Hy’s, in the financial district………we went there because The Keg had a 45 minute wait and Drake’s restaurant was the same……..Hy’s was sort of like taking my Range Rover in for service. Why get an oil change at Mr. Lube for $60.00 when you can get it done at the dealer for $200.00? At Hy’s, the meal was 7 out of 10…..pretty good…….but so overpriced it spoiled the epicurean enjoyment of the meal……..however the company and story telling made up for it…….next time you see Tucker, ask him about the CRMA lunch?

Thanks for reading……..have a great week.