It’s been a great few weeks for me. You too I hope. The weather in Ontario is unseasonably warm and everyone is justifying our good climate fortune by reminding each other of the bad July. It can’t last forever but we’ll take a heat warning in late September anytime.

September is my reset and reflect month especially when it comes to my health. Many use January for this, for me it’s September. I have tried to be active for as long as I can remember. I played amateur sports when I was young. I tried out for baseball, hockey and football at the house league level. I enjoyed it at the time, but knew I wasn’t very good.  I have exercised, jogged, (ran a half marathon in 1988), lifted weights in a gym and at home for decades and have always tried to be active. Dawn and I have walked a thousand miles. My weight has fluxuated over the years. But has been very steady for the past 3. I’m happy with the path I’m on.

The realization and change for me began in the mid 2000’s when I discovered quite by accident that my blood pressure was dangerously high. Like 220/120 high. I was having some dental surgery and they asked if I had high BP? I said I’m not sure. It’s called the silent killer for a reason. They did the surgery reluctantly and said I need to get checked at the doctor as soon as I could. Well, I was a man in his late 30’s, we don’t see doctors unless we’re sick and even then, it’s “suck it up” time. I didn’t even have a doctor. I followed the advice and did go in and the clinic staff were alarmed at how high it was. They did an immediate ECG and thankfully my heart was fine. But it, and other organs and arteries could have been damaged after years of high blood pressure. You dont know if you have high blood pressure, you have to check it. Thinking back of course, I had headaches often, I would get large bruises after bumping myself and often felt “quiet” stress if that’s a thing….maybe anxious is a better descriptor. At the clinic I told them I had been exercising every weekday for years and they said not to exert myself again until we figure this out. Yikes! That was a huge flag….which probably made my BP go higher. I was incredibly susceptible to a stroke or a heart attack. My Dad died from complications of a stroke and high BP runs in our family.

Thankfully, I did not have a stroke or heart attack or any other serious event. I did find the right mix of medication over the next few weeks to control my blood pressure and have lived well or have tried to live well with regular check ups ever since. Although I have replaced a regular check up at my family doctor with a private clinic. That privilege is available to me so I’m taking advantage of it and trying not to be a burden on the system. I still see my doctor when needed. Like after having a Kidney stone attack or to review my daily meds prescription. With these meds…….my BP is this. Pretty good huh? 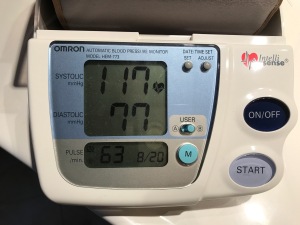 So, on Friday, I really enjoyed my half day visit to the Private clinic for my annual health screening. I have gone for the past 3. The treatment includes an ultrasound, blood work, breakfast after a 12 hour fast, flexibility tests, stress test, dietician consultation, hearing test, vision test, lung capacity and a lengthy one on one with a physician that includes a physical. Yes, it’s quite the experience. Men will appreciate the best news that day when the doctor proclaimed my prostate is better than average. It was almost complimentary.

I saw a new doctor this time. My previous doctor was Bruce Cockburn’s brother. Dr. John Cockburn. They are not twins but you could sure tell they were brothers. John even wore round eye glasses. I always made a few quips about his brother’s songs while he was examining me. “That must be the coldest stethoscope of the year”. Anyhow, my new doctor was much younger and while he told me about his 4 and 2 year old children, I told him about my 3 and 2 and 1 year old grandchildren. I was pretty impressed with him.

Here’s something new……he asked if I had any questions about marijuana. It’s becoming legal in July. That was funny but he’s right. I told him I do not partake but if that changes I’ll let him know.

Let’s talk booze instead. Did you know that if any of us gets intoxicated, by consuming alcohol, we actually are drinking too much? Medically speaking. Think about that classification. Doesn’t everyone drink to get a buzz? I mean everyone. Right? So suffice to say, most people I know are drinking incorrectly and having a bottle of wine on Saturday night is a medical no no. …….. but I’m not changing that habit. He said he understands that. 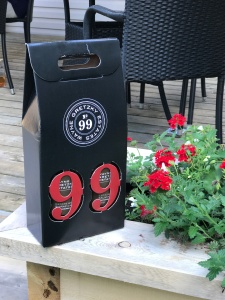 The rest of the conversation was amazing. Talked about my history, my family history, my Mom’s remarkable life, my Dad’s death, my brother’s death, Dawn’s cancer last year, the mole on my neck and the shingles vaccine among many other topics. We criticize wait times and physician’s lack of office and face time in the public system, but I believe anyone who got into medicine did so for the reasons I mentioned above. To help patients and part of that is getting to know them. I hope we can improve that. Yes, this was a private clinic but I think the standard could and should be equal.

When I left yesterday I called Dawn to tell her the results and that I was really happy. She of course wasn’t surprised and was happy for me. She’s like that. You should know that I went in with a competitive attitude. I wanted to better my assessment from 2016. My weight was the same as last year 83kg and I haven’t shrunk, still 5’10” and a bit. Did you know that if you take those numbers and create the BMI score it barely and I mean barely puts me under obese? That’s stupid and that’s why you have to use waist size and muscle mass in the calculation.

My stress test results were above normal and I was able to go about 4 minutes longer on the treadmill. I don’t use the treadmill during the year. I’m an elliptical man. By the end, you are jogging up a hill and you feel it. Believe me.

My flexibility was fantastic. Of course, they change all the exercises from the previous year. I said to the tech that I’ve been working on grip strength and reverse push-ups/pelvic thrusts all year. He laughed and said good! He did let me test my grip strength which is a very important function as we age. In year’s past, I could achieve 40kg per hand. That was normal. This year, it was 57kg per hand. He was impressed. Me too. I’ve really noticed a stronger grip this year carrying bags and working in the yard. I’m sure I would’ve noticed it with a golf club if I actually picked one up this year. I have not. If you’re interested, the improvement was all from those silly grip rings at the sporting goods store. Buy one. Give it 30 squeezes a day per hand. You’ll thank me.

One of the exercises he asked for was an arms extended push up. Think of laying on your stomach, arms stretched out in front. He pulled my hands back until my elbows bent slightly. He then asked to do one push up and not to bend my core. Boom. Easy, honestly. Then he brought my hands even closer to my head and said do it again. That was even easier as the leverage improved. He said obviously you work your core and your arms. Guilty I said. It was interesting when he told me that many men 20 years younger could NOT even do one rep of the easier version push up and I nailed the difficult one. That felt great. Hey, Women like to be complimented on their shoes, men like to hear they can do a difficult push up what can I say?

The other stuff included squats, and lunges. All good. My hearing hasn’t diminished in a year but my left ear has lost some high frequency capability. Unfortunately once we lose hearing, it doesn’t come back. I need my hearing for my job. It’s 100% in my right ear. My Vision is eagle eye for distance and Mr. Magoo for up close. Thus the readers. Lung capacity was well above normal. (never smoked)

A good chat with the dietician as well. They ask you to do a food journal for 3-5 days ahead of the visit. You should try this if you haven’t. You have to write down everything you consume. And the amounts. It’s eye opening for many I believe. It was for me and I found it helps you make decisions on that extra slice of cheese or snack in the evening. She was impressed for the most part with my diet. I explained that there were a lot of leftovers this past week from Jude’s birthday and I don’t normally have a hamburger patty or hot dog with my egg whites. She obviously noted the lack of sugar, and flour in my meals. I explained that we don’t eat sugar or flour. She thought there was nothing wrong with that but thinks I need some complex carbs at lunch perhaps. I’ll think about that as I sometimes feel a little sluggish in the afternoons. I just take a nap at my desk for that and no one even notices. Ok, not really. So no changes to diet coming up this next year. No sugar, yes I do miss sweets sometimes and no flour, no I don’t miss bread or pasta. Weird huh?

Here was a day from last week. Do try this at home.

My Blood and ultrasound results will be delivered in a few weeks with another consultation on the phone.

All in all, it was a great experience and was time well spent on myself and my pursuit of good health. I’m not an athlete or a model but we all can do things to improve our chances of better lives. If we’re not healthy what do we have? I had a chat with Julie Adam about going to the clinic this week. She goes too but wishes there was an express lane. She’s funny. We talked about health and sleep and exercise and nutrition. We both agreed sleep is the key. But the other two are important as well.

2 thoughts on “I was once near death……I think”